One of the poignant parts of the Homecoming 21 project is seeing the photos of the actual gravestones and markers of the Americans who were brought home from cemeteries in Belgium and France 100 years ago. In Medford, Massachusetts, is a federal gravestone in a peaceful spot. Visitors to Antioch Cemetery in Alachua County, Florida, will find a lone Doughboy grave with an open bible carving. And Sag Harbor, New York, has a touching grave marker with the briefest of information.

This has been a key feature of Homecoming 21 to use the burial map to locate the graves of the men and women who were brought to their hometowns by their family requests in 1921. By exploring the map, visitors will be able to find at least one man or woman in almost every county of the United States, which can lead to a visit to the grave. Which brings us to one Doughboy grave so large it can be seen from the sky.

New York City has hundreds of Doughboy graves, as nearly ten percent of all soldiers in WWI were from New York. In quiet Woodlawn Cemetery in The Bronx are four men who were brought home in May 1921 aboard the United States Transport Ship Wheaton; three officers and one enlisted man. While three of the graves could be considered modest and similar to others across the country, the final resting place of a doctor who volunteered to go Over There is remarkable. This is Major Clarence Fahnestock, son of a wealthy family, a millionaire who left his medical practice and luxurious lifestyle behind to volunteer with the American Expeditionary Forces.

Fahnestock was the scion of a bank president who chose medicine over finance. He graduated from Columbia and was on the staff of Presbyterian Hospital and New York Eye and Ear Infirmary. Before the war he took vacations to Africa where he was a big game hunter. He rode horses, and owned a vast 6,000 acre estate in Upstate New York for camping, hunting, and hiking (today a state park). When volunteers launched officer training in Plattsburg, New York, he was among the first to sign up to help train men for commissions in the U.S. Army. He resided in a family mansion on Madison Avenue when he left for the Army.

Fahnestock was a member of the Seventh Regiment, the famed New York National Guard unit from the Civil War that was called the “Silk Stocking Regiment” for the notable men on its roster. In World War I it became the 107th Infantry Regiment of the 27th Division. Major Fahnestock was transferred to the 301st Infantry Regiment, 94th Infantry Division, and went to France in 1917 to work in an evacuation hospital. He joined the headquarters staff of the 94th Division. As the war drew to its epic conclusion, Major Fahenstock contracted pneumonia and died on 5 October 1918. He was 44 years old. He was interred in the officers section of the American cemetery in Chaumont, a commune and the capital of the Haute-Marne department.

In 1920 his family notified the War Department of its wish to bring him home to New York. His remains were removed from French soil in early April 1921 and transported via rail to Antwerp, Belgium, and brought onto the Wheaton. The ship arrived in Hoboken, New Jersey, on 18 May 1921. Following a private memorial, his casket was brought to Woodlawn Cemetery and the magnificent mausoleum his father had constructed for the Fahnestock family.

The mausoleum was designed in 1895 by Peabody & Stearns for Harris Fahnestock and his large family. Fahnestock was associated with the bank that is today Citibank, and his sons were Wall Street members contributing to the family’s wealth. Peabody & Stearns designed scores of landmark buildings still standing, among the most famous is Boston’s Custom House Tower. The Fahnestock mausoleum design spared no expense; the domed interior features a mosaic tile ceiling by Louis Comfort Tiffany Studios.

Using the Homecoming 21 map visitors will honor our WWI fallen by visiting their graves, small and large. 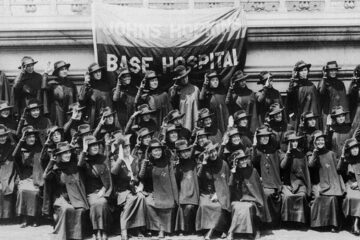 Today is National Nurses Day and also a sad link to WWI history. While the nation salutes those brave professionals on the front lines of our healthcare during the pandemic, it is also the perfect Read more… 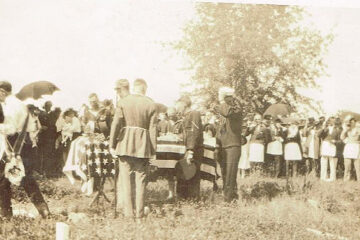 A forgotten chapter of the return of a Missouri soldier is brought to life by rare photos from the 1921 burial.